In the floral trade, Phalaenopsis orchids are extremely popular – both as potted plants and as cut flowers in bouquets. The flowers are very showy and the bloom can last for a long time, up to three months indoors. It is also possible for these orchids to bloom more than once a year, and

Phalaenopsis orchids are available with many different flower colors and nuances.

Phalaenopsis orchids are also known as Moth Orchids, because the flowers of some of the species look like big flying moths.

Unlike many other orchids, Phalaenopsis orchids do not produce pseudobulbs. 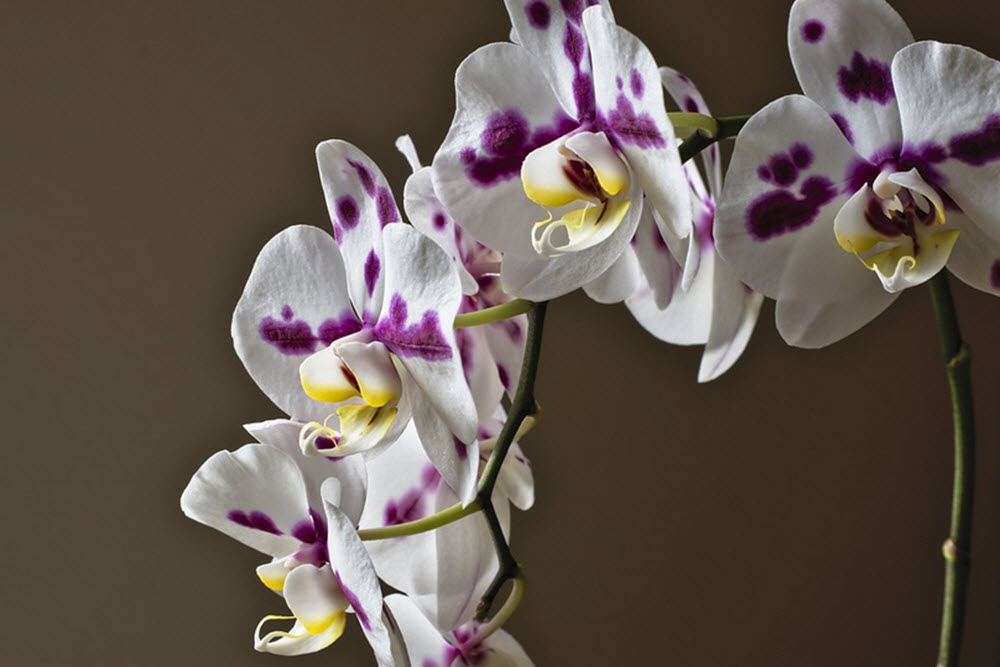 How many species of Phalaenopsis orchids are there?

There are also many cultivars of Phalaenopsis.

Where are they from?

Wild Phalaenopsis orchids are native to northern Australia and parts of Asia. In Asia, they can be found from the Himalayan mountain region to the Philippines.

Caring for a Phalaenopsis orchid

We also recommend that you gently repot your orchid every other year to give it fresh potting medium. A Phalaenopsis orchid will not really outgrow its pot, since it grows upwards, but will still benefit from having the potting medium replaced. After repotting, cut down on the watering for a while to promote root establishment.

Water enough to keep the potting medium moist just below the surface. Excess watering will damage the orchid, since it is not adapted to growing in soggy soil. In most situations, watering the orchid once a week is a good rule of thumb.

Important: If your do not use a proper well-draining potting medium for your Phalaenopsis orchid, you are likely to run into trouble even if you follow the watering recommendations perfectly.

Wild Phalaenopsis orchids are typically found in lowland forests where the tree canopy filters the sunlight. Intense light can burn the leaves. Avoid placing your orchid where it will be subjected to strong direct mid-day light (circa 11 am to 15 pm).

If the leaves become a very dark green, it can indicate that your orchid wants a bit more light.

The buds are more sensitive to temperature extremes (too cool or too warm) than the rest of the plant.

A well-established Phalaenopsis orchid can handle fairly cool temperatures, but is likely to stop budding. If you want your orchid to bloom, make sure the temperature is not to cool.

Some people believe that the best way to promote blooming is to give the orchid huge amounts of nutrients. This is not true – too much nutrients is not good for the orchid, and it is easy to over do it.

Generally speaking, a total of one teaspoon of fertilizer per month will be enough if you are using standard Phalaenopsis fertilizer.

Always dilute the fertilizer well in water, and give it over several waterings instead of just one big helping.

When the flowers have wilted, cut the whole spike just above the highest node. With a bit of luck, a keiki will develop there. (Or you will get a new flower spike, which is also nice.)

A keiki is a small baby plant that will develop into a new orchid plant if you remove it and plant it in its own pot. (Keiki means baby in Hawaiian.) If you let the keiki stay on the mother plant, it may begin to flower there.

A keiki is a clone of the mother plant and thus have the same genetic material. It is not produced through sexual reproduction.