Orchids from the genus Anguloa are not very common in the floral trade and you are definitely unlikely to run into them in the local supermarket next to the moth orchids. Anguloas are more of an acquired taste, and are held in high esteem by many devoted orchid collectors. The flowers smell like cinnamon. 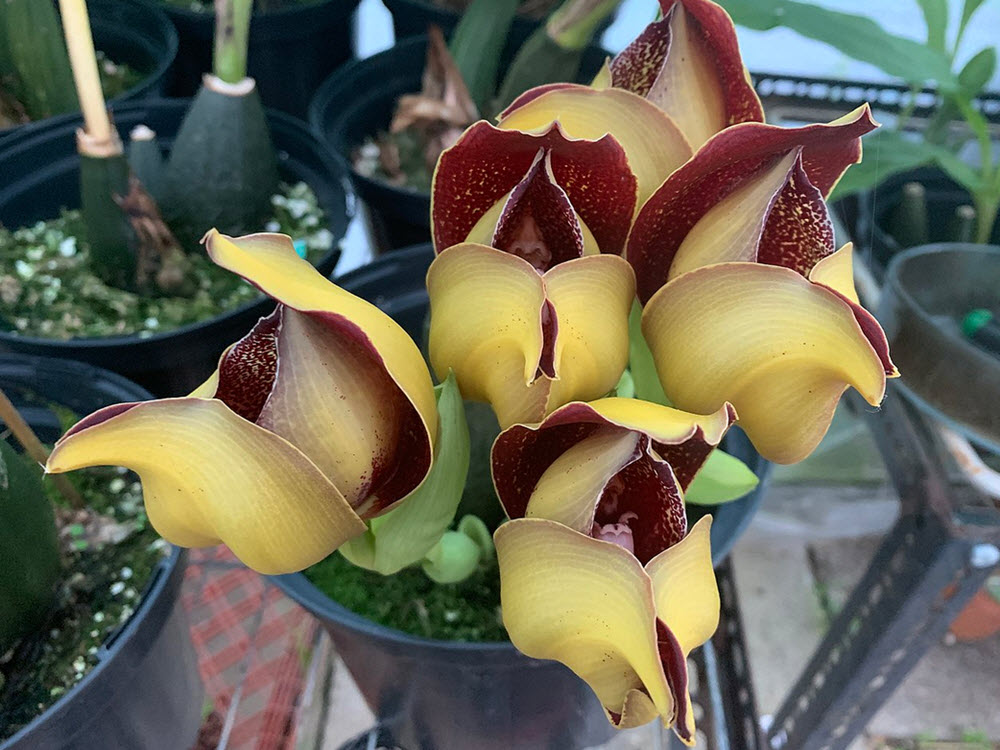 Wild Anguloa orchids grow in mountainous regions of Venezuela, Colombia and Ecuador. Some are terrestrial (grow in the ground) while others are epiphytic (grow on trees). The genus Anguloa was named after the Peruvian orchid expert Francisco de Angulo, who managed mining operations in South America during the later part of the 1700s.

In English, Anguloa orchids are known as Tulip orchids, because the flower sepals are bulbous, giving the orchid a bit of a tulip-look.

We recommend you find out if your Anguloa orchid hails from epiphytic orchids or terrestrial orchids, since epiphytes are less apt at handling a potting medium that doesn´t dry out again quickly after each watering.

If you can´t find more specific information about your orchid, use an orchid bark mix. Repot immediately if the medium does not drain well, if it smells bad or if you see mould.

If your orchid is an epiphyte, it doesn´t have to be planted, it can grow clinging to a branch. You will need to attach it first, but over time it will attach itself to the surface.

It is best to find out the ancestry of your particular Anguloa orchid and mimic its native environment when it comes to watering.

If that is not possible, follow the watering recommendations for Anguloa clowesii, but keep an eye on how the plant is doing and be ready to adjust as needed. Anguloa clowesii is native to parts of South America where there is a wet season and a dry season. The wet season is the growth season, and the A. clowesii likes to receive plenty of water during this period. You should not allow the medium to dry out completely between waterings during the ”rainy season”. The dry season (late November – middle or end of January) is a season for rest, and you should decrease the waterings. When you notice new growth around the base of the old pseudobulbs, increase the waterings again and gradually start mimicking the onset of a new rainy season.

Most of the Anguloa orchids will benefit from getting a lot of nutrients during the rainy season / growth season, but if the tip of the leaves become yellow/burned, it can be a sign of overfeeding or feeding too much per serving.

If you do not know the specific requirements of your Anguloa species / hybrid / cultivar, start with 20-10-20 fertilizer.

Add plenty of nutrients during spring and summer, decrease it during spring, and give no fertilizer at all during the dry season resting period.

Anguloa orchids are tropical plants, but most of them grow at high elevations where the climate is cooler than at sea level, especially at night.

In the wild, Anguloa orchids normally grow where they are shaded by the canopy of trees during the rainy season. During the dry season, quite a few trees drop their leaves, giving the orchids below more sun exposure.

Note: Some Anguloa species grow on tree-less mountain slopes and receive full sun year round, but only during certain hours of the day.