The genus Coelogyne is fairly rare in the trade. Do not expect to find them in the supermarket next to the Moth orchids.

One example of a Coelogyne that is offered by many specialists orchid vendors is the Black Coelogyne orchid, named after its black and intricately patterned lip. It is not a species; it is a hybrid between C. pandurata and C. burfordiense. 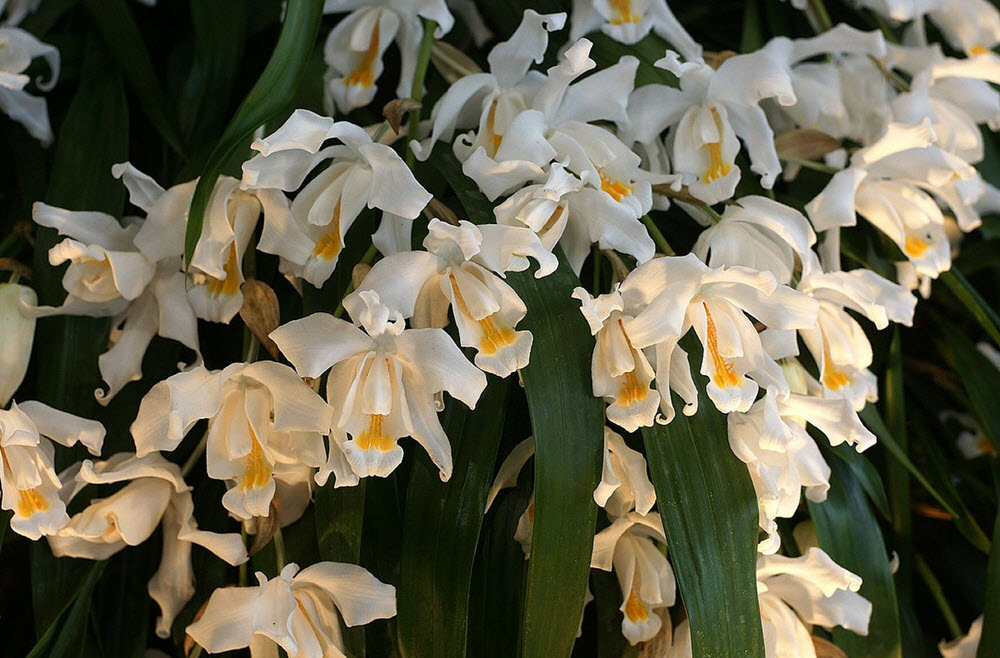 Most Coelogyne orchids produce white flowers, but there are exceptions.

Where do they grow in the wild?

Coelogyne orchids grow in parts of Asia, including places such as the Indian subcontinent, the Himalayan region, China, Indonesia, and the Fiji Islands. The islands Borneo and Sumatra are two main centres for this genus, and so is the Himalayas.

The name is an allusion to the concave (“hollow”) stigma.

It is advisable to obtain advice regarding your specific species, hybrid or cultivar of Coelogyne. In the wild, some Coelogyne orchids grow at fairly high altitudes where temperatures are cooler than in the tropical lowlands, and they will not have the same preferences as the lowland species.

Many – but far from all – Coelogynes need a resting period each year. Examples of species that do require serious rest are Coelogyne cirstata, C. pandurata and C. onchracaea. C. massangeana and C. mooreana also benefit from rest, but not as serious as the previous three.

Many species of Coelogyne will do well in medium grade compost mixed with bark. It is important that the medium is well-draining.

Repot your Coelogyne in April, or when the flowering period is over.

If you keep your Coelogyne in a big pot you only need to repot it every 3 years.

Repot immediately if the medium loses its draining capacity, of the medium smells weird or if there is mould.

Many Coelogyne orchids need a resting period, when they should only be watered sparingly or almost never. For many species, the ideal resting period runs from late October to late March. Start giving more water when you can see new growth that is at least 1 cm high.

During the growth period (typically late March to late October), the orchid needs a lot of water, but should not be watered more frequently than once a week unless the air temperature is very high.

Give nutrients during the growth season, but not during the resting season.

General purpose plant food can be used if you mix it to ¼ of normal strength. Always give at least one watering per month with no nutrients, to flush the medium of build ups.

One exception to the use of general plant food as fertilizer is the period late August – late September (soon before the rest), when a higher potash fertilizer is better. This type of fertilizer helps the bulbs to harden, which promotes increased flowering during the next bloom. Stop giving nutrients in October, to prepare the plant for the resting season.

Coelogyne orchids likes plenty of sunlight, but of the leaves look yellow or burned, they might be getting too much. The midday sun (11 am – 3 pm) is especially dangerous and should ideally be filtered.

A Coelogyne orchid that doesn´t get enough light will have trouble growing well-formed and compact, and the leaves can develop a very dark green colour.

This depends on the species (or hybrid or cultivar).