These orchids are often described as borderline unreal in their appearance, because the flowers develop a sort of lacquered surface. Add intricate shapes and striking colours to this, and it is not difficult to understand why so many people love to keep Paphiopedilum orchids. If you take good care of your Paphiopedilum orchid, the bloom can last for months. 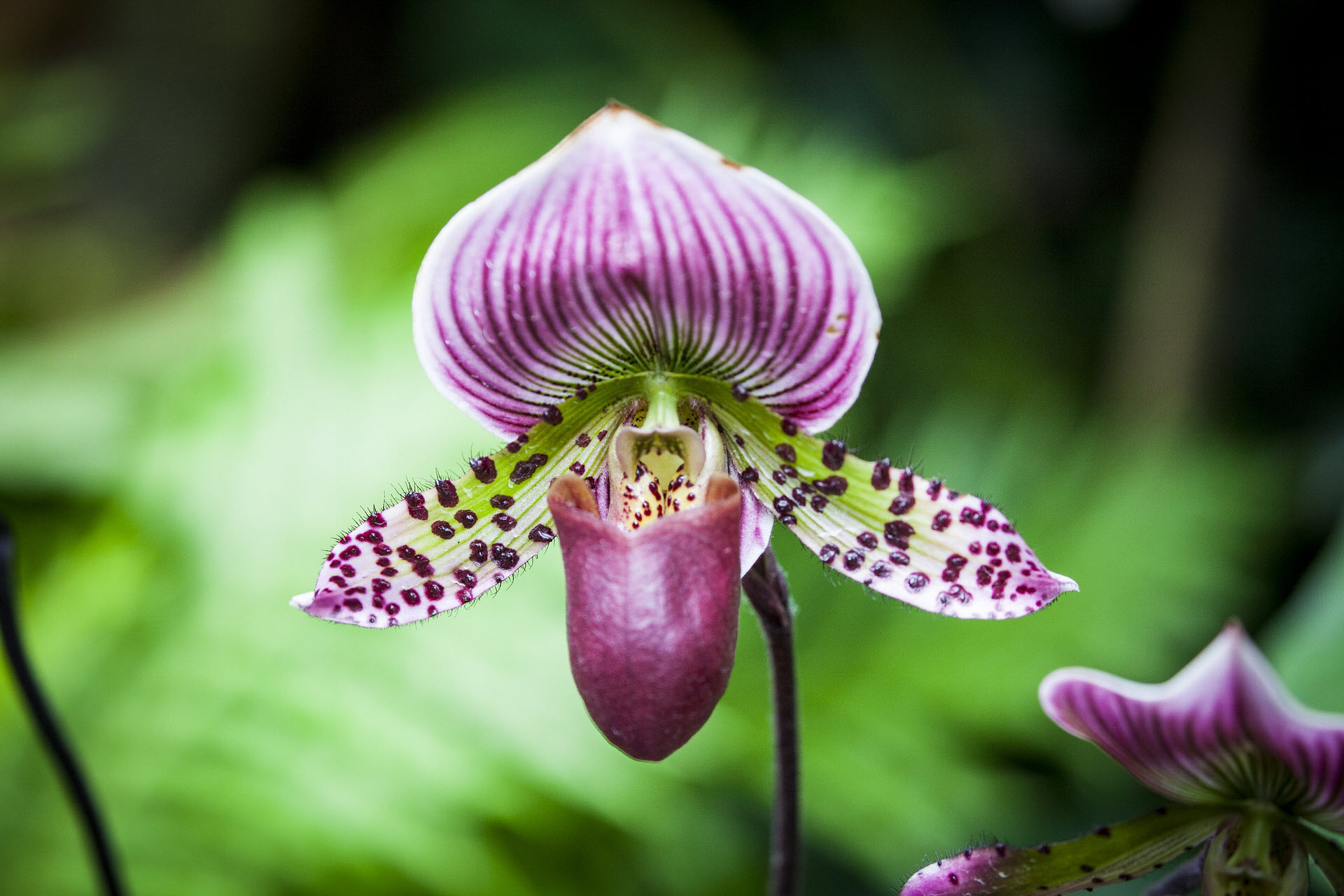 Wild Paphiopedilum orchids grow in parts of Asia, and also on some Pacific Islands. In Asia, they are found from India to southern China and in South-Eastern Asia.

A majority of the Paphiopedilum species grow on the ground, in the humus layers of the forest floor. Some break from this pattern and are instead epiphytes (grow on trees) or lithopytes (grow on rocks).

Compared to many other orchids, ground-living Paphiopedilum species have fairly low light requirements. They also like moist air, which has made them a popular choice for bathrooms with small opaque windows.

Ideally, plant the orchid in the smallest pot possible.

Repot once a year, preferably right after the flowering period.

Paphiopedilum orchids prefer an air humidity in the 50-60% range. They often do better in kitchens and bathrooms than in the rest of the home.

If the air is dry, use a humidity tray to create a better environment for your orchid.

Ideally research your orchid to find out how it grows in the wild. Ground-growing Paphiopedilum orchids standing in the humus layer of the forest floor will do well with a bit more lingering humidity in the potting medium compared to the lithopytes and the epiphytes.

If you have a ground-growing species, keep the medium moist at all times instead of allowing it to dry out completely between waterings. This does NOT mean that the medium should be kept soggy.

It is best to water early in the morning, to give the plant above ground plenty of time to dry before the night.

The ideal water frequency will depend on temperature, air humidity and potting medium. Every fourth day or so can be required in hot and dry environments, especially if the potting medium does not retain moist easily. In cooler and damper situations, and with potting mediums that retain moist, watering once a week might actually be too much.

It is best to research your Paphiopedilum orchid to find out its requirements, because this vary from one species to another (and among the various hybrids and cultivars).

A majority of the wild Paphiopedilum orchids grow on the forest floor and are not adapted for strong direct sunlight since they live their lives in the shadows created by the tree canopies. This doesn´t mean that they can survive inside your wardrobe, just that they prefer filtered light and should not be exposed to direct strong midday light. Moderate lighting will promote both growth and flowering.

If you place your Paphiopedilum in a south-facing or west-facing window, shading/filtering becomes especially important. Also keep an eye on the temperature; it might be too high for the orchid to thrive.

We recommend a 20-20-20 fertilizer during the growth season.

Mix 1-2 teaspoons of fertilizer with plenty of water and feed it to your orchid over the course of one month, for every month during the growth season. Just giving a big helping of nutrients is not recommended.

Do not water only with this. Normal pure water waterings need to come between the nutrient-waterings, otherwise salt can build-up in the potting medium and damage the root tips.