The genus Cymbidium contains over 50 scientifically described species, and they are native to tropical and subtropical parts of Asia and northern Australia. They are typically found at higher elevations, where the climate is cooler than at sea level. Most species are either epiphytes (grow on trees) or terrestrial (grow in the ground). 16 natural Cymbidium hybrids have been found in the wild. 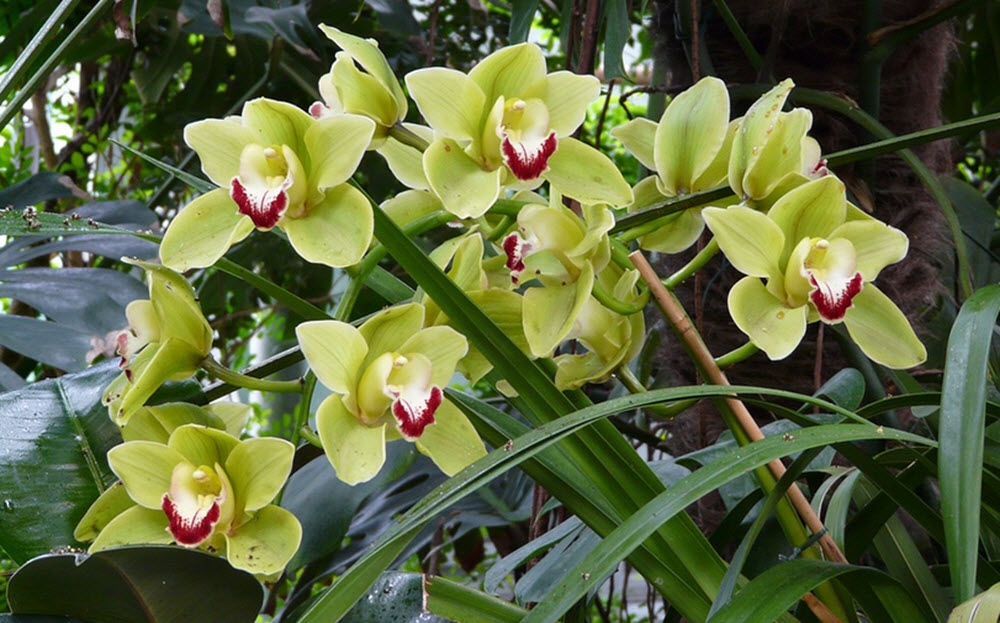 Cymbidium orchids are not just beautiful, but also capable of flowering indoors during the winter months. This has made them especially sought after in parts of the world where most other flowering plants are going through a rest period in the wintertime.

Cymbidium orchids have been cultivated in parts of Asia for over 1200 years and are still very popular there. There is even a hybrid named ”Happy Barry Sailor Moon” because its colour is the same as Sailor Moon´s hair colour.

The name Cymbidium is derived from the Greek word kumbos, which means cavity. It alludes to the form of the lip base in Cymbidium orchids.

Some members of this genus are saprophytic herbs.

Use a well-draining medium, such as fir bark mix for orchids.

Repot the orchid every 2-3 years. The best time for repotting is a period when you are feeding it high-nitrogen fertilizer.

A well-established plant is likely to survive temperatures as low as 45˚ F (7˚ C), but spikes and flower will suffer.

Some individual Cymbidium orchids have even reportedly survived occasional frosts when kept as outdoor plants, but this is risky.

The Cymbidium orchid wants plenty of light in the morning and late afternoon, and shade or filtered light from 11 am to 3 pm.

Yellowing leaves can be a sign of too strong sun.

If the plant does not get enough sun, it will produce extra chlorophyll in an attempt of surviving and the leaves will therefore become dark green. If you see this, provide your orchid with more light.

Recommended water routines depend on several factors, and a Cymbidium kept in dry indoor air will need more water than an outdoor plant growing in fairly moist air, and so on.

In a room with central heating, a good rule of thumb is to water every 8-9 days. Adjust as needed.

Dilute the fertilizer well. One teaspoon per month is recommended, but serve it divided over many waterings.