Brassia orchids are epiphytic plants growing on trees in the Americas. Their native range goes from Florida in the United States, through Central America & the Caribbean, and into the tropical parts of South America. They prefer humid forest environments that receive a lot of rainfall, and are not found more than 1,500 meters above sea-level.

In the floral trade, Brassia orchids are known as Spider orchids, because their elongated, spreading tepals make the flowers look a bit spidery. In some species / hybrids / cultivars the tepals can exceed 50 cm in length. 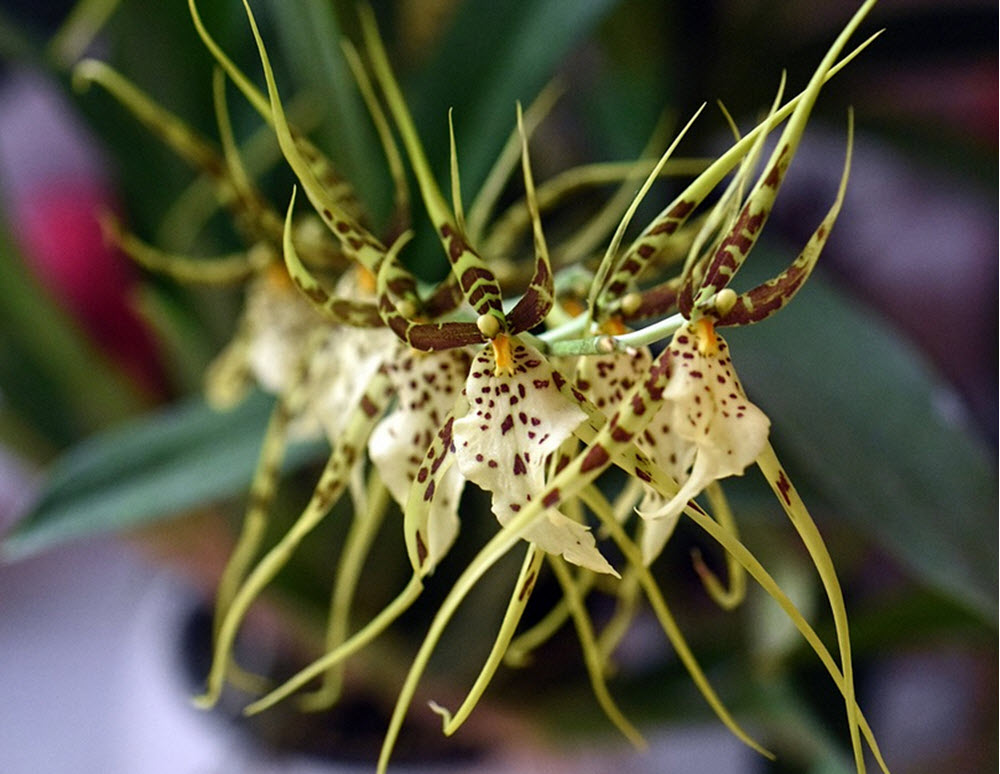 So, what´s the point of looking like a spider when you are actually an orchid? It´s all about reproduction. Female wasps of the genera Pepsis and Campsomeris both hunt spiders. An orchid that looks like a spider lures them in, and they will actually attack and sting the lip of the flower trying to kill the ”spider” part of the flower. During this attempt, the wasp will touch the pollinarium and get pollen over its head. When it flies to another spider orchid and repeat the process, pollination takes place.

The genus Brassia is named after the British botanist and illustrator William Brass, who collected plants in Africa in collaboration with Sir Joseph Banks.

An orchid potting medium consisting of medium to large bark is recommended, due to its excellent draining capacity. Even better, mount your Brassia orchid to wood and let it grow like it would in the wild. You will need to attach it at first, but eventually it will attach itself to the wooden surface.

If your Brassia is potted, repot it every 2-3 years.

Repot immediately if the potting medium stops draining well, if it smells bad or if you notice mould.

The recommended air humidity is around 60%.

If the air is drier, use a humidity tray.

Good air circulation is important, because otherwise the humidity can cause problems for the orchid.

In the wild, Brassia orchids grow on trees and Brassias are therefore not adapted to living in soggy soil. Allow the potting medium to dry out completely before you water again. Or even better, do not keep your Brassia potted – it is an epiphyte.

Use an orchid fertilizer. Dilute it well and apply it every 3 out of 4 waterings.

A majority of the Brassia orchids benefit from having nights that are cooler than the days, but do not expose them to temperatures below 60 degrees F (16 degrees C).

Do you have a spot in your house where Cattleya orchids like the light conditions? If so, that spot is recommended for Brassias too. Brassia orchids like to get plenty of sun in the morning and late afternoon, but needs shade or filtered light from 11 am to 3 pm to prevent the leaves from getting burn damage.

If the leaves turn very darkly green, the plant needs more light. The plant is producing extra chlorophyll in an effort to survive despite the lack of light.